In 2003 an intrepid group of local writers decided to supplement their frantic NaNoWriMo writing with weekly meetups, and began by meeting in the fantastically eerie Pit & Pendulum in Nottingham City Centre. A month later, with a high of around eight participants, we decided it was fun enough we should do it again the next year.
In 2004 — the same year we received our own regional forum on the NaNoWriMo site, Europe :: England :: Nottingham — we moved to the Malt Cross.  Though we were still only a small group, we struggled to fit around the Pit & Pendulum's tables and needed space to spread. We remained there until 2015, when we set out for pastures new in search of sites that could cater for our growing size.
We've since been housed at The Roebuck, The Bell Inn, The Pit & Pendulum (again) and back to The Roebuck.
In 2017 we settled for a brief, wonderful time at The Old Boston Coffee Shop, who were kind enough to allow us to use their basement for free; unfortunately, they closed their doors in February 2018.  We were also lucky to find the excellent Creme in the Broadmarsh, but they regrettably closed their doors in December 2018 due to the Broadmarsh's long-delayed refurbishment works.  Unfortunately we are now homeless again...
At present we meet at Café Sobar on Friar Lane; a map is available below. 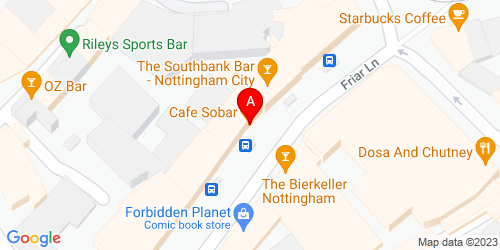 At present we have no true fixed home for the meets following the sad closures of Crème and The Old Boston Coffee Shop, although we meet at Café Sobar at present.  Please let us know any suggestions for a city-centre café or restaurant that might be able to accommodate up to 10 writers on the first Saturday of every month, or email us at notts.nano@gmail.com.  (Plug sockets not required, but would be the icing on the cake.)

The next meet will be at Café Sobar on Friar's Lane.  Meets usually begin at around 11am and can carry on until 2pm-4pm — although if you want to attend later or leave earlier, don't let that put you off joining us for however long you prefer.